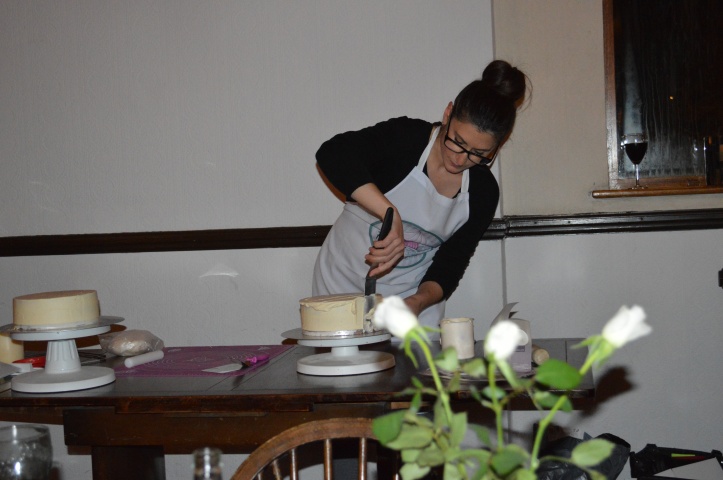 March’s meeting saw us learning about a staple WI skill (!), cake decorating. Our speaker for the evening was Emete from Friddle’s Cakes. A former graphic designer, she now spends her days creating stunning cakes for birthdays, weddings and christenings and her design credentials are plain to see.

First we learnt about covering a cake in buttercream, to start with you need a flat surface and there are numerous gadgets you can use to flatten your top and sides. Emete said to always make the cake bigger than you think you need as you will probably cut a lot off to flatten the top. Once your cake is straight and flat you add a ‘crumb coat’ of buttercream which is a fairly thin coat to completely cover the cake – then pop it in the fridge for 20 minutes to set before adding another, thicker, coat of buttercream which should leave you with no cake showing through at all. Put it back in the fridge for another 20 minutes to set before adding the fondant icing. If you don’t want to ice the cake you can use a small palate knife and a turntable to create a pattern around the sides.

Next we were shown how to cover a cake in fondant icing, shop bought fondant is perfectly fine for the job (and tons easier than making your own!). Use a large non-stick rolling pin to roll a circle of fondant bigger than the cake, pick it up using the rolling pin (so you don’t get fingerprints on it) and lay it over the cake, you can then use a pinching and pulling technique to cover the sides, and an icing smoother to get that professional finish. Cut off the excess at the bottom with a sharp knife.

Finally onto the hands on bit! Making roses from fondant icing. You can get special tools for the job which make it much quicker, however any circle cutter can be used to make the petals which you stick together with water or edible glue. There were some fantastic efforts from the members and lots of them bought the special mats and rolling pins to practice at home! We also got a chance to sample some of the delicious cake – both chocolate and vanilla, and Emete handed out recipes for a vanilla sponge to try at home.

We really hope you enjoyed the meeting, we’ve still for a few mats and rolling pins left to purchase for £3 if anyone would still like one.

⭐️🎄CRAFT CLUB 🎄⭐️
We had a wonderful time making Christmas Pomanders. Really chilled and mindful evening.
✨JOIN US AT NOVEMBER’S WI MEETING✨
Great craft night @mariwish and all baskets were finished!! 👏🏼👏🏼👏🏼 Justine, Helen, Michelle and Ursula
💗🧶CRAFT CLUB🧶💗
Who wants to make a t-shirt yarn basket?
Remember CRAFT CLUB tonight at The Dolphin Sydenham 8pm
April is the first month of our membership year and we’re kicking off in style with a skin pampering evening, hosted by Olivia White at Temple Spa. If you join or renew the new membership year by 30th March, this will be covered in your fee. Non members will be charged £5 for this session to cover cost of the kit. To book your place or enquire about membership, please email us at ForesthillWI@gmail.com
Posted @withregram • @womensinstitute On Friday 19 March, we are calling on WI members to show their support and solidarity with all women who have experienced abuse and harassment. Between 6pm - 7pm, we would like WI members to safely join our ‘WI Walk with Women’, in accordance with social-distancing rules. Together with members of your household, in your support bubble or with a fellow WI member within your local area, we are asking WI members to join us by walking down your street; using candles, lanterns or your phone’s flashlight, to show your support. 🕯
Join Forest Hill WI tomorrow for Sex, Secrets, Scandal & Salacious Gossip of the Royal Court. Warning - not for the faint of heart!
Thank you so much @by_me_katie for a great macrame session last night. Everyone agreed it was a most enjoyable evening and were very pleased to have achieved completing their plant hangers! .
Craft club online last night! Such fun and thanks for joining in.
When even your daughter's mini kitchen is a dumping ground for random stuff you know you need tips from a de-cluttering pro. Meet Katherine Blackler from Sort My Space tonight, from 7.30pm at All Inn One pub #springclearing #sortmystuff #aplaceforeverything #sortmylifeout
A great time was had by all last Monday when we invited Einat Aronberg who taught us Krav Maga self defence. It is known as the most effective self-defence system in the world and we all managed to do it!!! Welcome to our visitors and new members, it was great to meet you and hope you enjoyed our first meeting of the year!!
Tonight we try Krav Maga Self Defence. Known by many as the most effective self-defence system in the world. Dress for comfort!
Last day of 2019 and we want to thank all our lovely members, followers and amazing speakers we have had over the year. We only started our IG account half way through the year so our #topnine shows just a few of this years activities. Our Walking Netball was very popular and thank you to @redharbouruk who taught us how to build our own little concrete pots and plant succulents in them! That was one of my personal highlights!
WINNERS!! well done Bake-Off legends! Cracking bakes and a great night 🥂🎄
Our Christmas Bake Off and Quiz is tonight! Members and Non Members welcome and it’s not too late to get baking.. OR fake it with shop bought (the fun is in seeing if you can get away with it!). Cakes, biscuits, savouries or jams/ chutneys.. all we ask is you write down the main ingredients 🙂. There are £25 Lakeland vouchers hanging in the balance!
Loading Comments...
%d bloggers like this: